Crypto Boom 2.0! Why Now Is the Time to Start Buying

We now know that, too, was also a bottom and the best time to buy stocks in the last five to seven years.

Hopefully you notice a pattern.

Too many people want to be “right.” They’re less concerned with actually making money!

They want to feel like they were ahead of the curve and smarter than everyone else.

So, they make outrageous calls based on emotions … hoping and praying markets will prove them right and everyone will pay attention to them.

And guess what? They miss out.

They miss out on the opportunities that can truly change your life financially.

So, let me make myself crystal clear…

I am as optimistic about bitcoin as I’ve ever been.

I believe prices have either bottomed … or really damn close.

And if you know me, if you’ve followed my research for any length of time, you know what I’m about to say next…

Ian and I have the utmost conviction that this bull market has only just seen its first wave.

I wasn’t always this bullish.

If you read Ian’s note yesterday, you realize I was warning people to sell bitcoin at its top in November and December 2017.

Neither the technology nor demand were there yet.

Compare that to where we are now.

This bull market started more or less around the $10,000 level last year.

Literally a quarter the size of the hype run in 2017.

The difference is, this bull market is not built on the convictions of individual traders like it was in 2017, but by institutions who realize they have to buy assets like bitcoin and Ethereum or get left in the dust.

In fact, I read a study showing 2017’s price action may have actually been caused by a single, all-in trader … yes, just one big money investor. 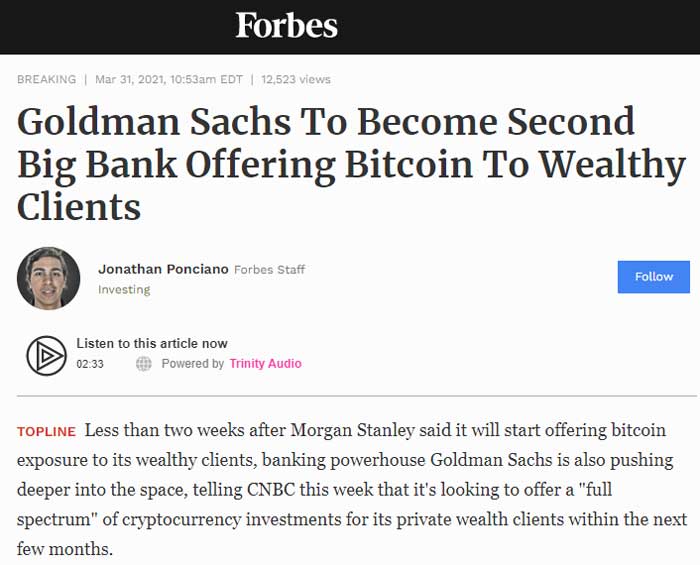 You have companies like Tesla, Square and MicroStrategy buying bitcoins by the tens of thousands. At one point, MicroStrategy CEO Michael Saylor says he was buying $1,000 in bitcoin every second!

We are aware of the headwinds.

I do not care.

These are temporary worries that will sort themselves out in time — and in fact, it’s already happening.

Miners are already moving out of China and into territories that are friendlier and accepting of disruptive innovations like bitcoin.

So, these are NOT fundamental flaws in the assets themselves.

Yes, there are headwinds.

Compared to the tailwinds? They’re nothing!

We’re talking about a revolution to the entire financial system that every major financial player is now betting on.

You think they’re buying because they WANT to get pushed to the wayside?

They’re buying because they realize if they don’t, they’re finished. Over. Done for.

Nothing can stop this ship from sailing.

I think you and all of my subscribers understand that selloffs are opportunities to BUY — and buy lower than everyone else.

We called the top…

We called the bottom…

And we are telling you with absolute confidence that this market is coming back and going to give you, our subscribers, the chance to make an absolutely mouth-watering amount of money.

I believe this will be the highest-rewarding asset class in the world to invest in.

And at Bold Profits, we have the ultimate strategy for making money in this space.

Six months in his own account testing the waters…

And another half a year roughly beta testing a strategy designed specifically for YOU.

All in preparation for this exact moment.

You’re going to be blown away at Ian’s track record — in both his personal portfolio AND the beta test.

People will say gains like these are impossible but they are happening left and right.

And you will have the ultimate guide.

I’m itching with excitement to share the full details with you.

Tune in to Enter the Cryptoverse: A Bold Profits Event With Ian Dyer this upcoming Wednesday, July 7 at 4 p.m. ET.